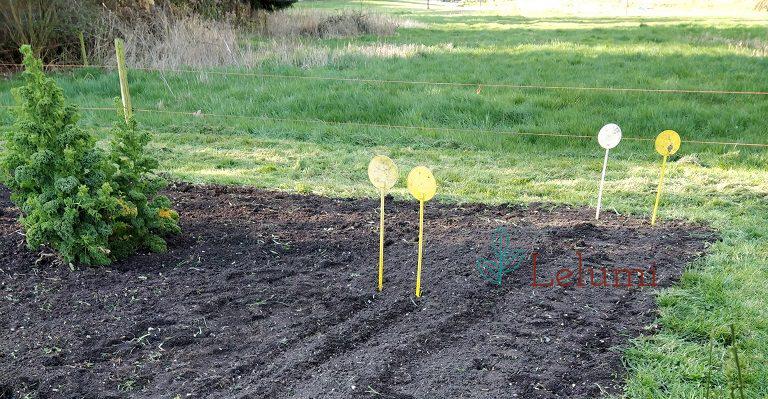 Technically, we’ve already planted the first vegetables when we seeded them inside. It would be more accurate if I named this post “Planting the first vegetables outside” but that was too long : ) So yeah, after we weeded the garden patch and made it all pretty, it was time to plant the first seeds and unions outside!

We were going to sow four kinds of vegetables:

We followed the instructions that came with the seed packages. They listed information about how much space you need between different plants (or at this stage, seeds) and between different rows. We made rulers from a wood slat to roughly measure the distances. For the seeds we were going to sow today, we needed 2 rulers: one of about 10 cm for the distance between the unions, and a ruler from about 30 cm for the distance between the rows.

After we planted the seeds, we realized needed some kind of signs to show where we planted seeds. At the moment we were able to see the exact spot of the seeds; but as soon as it would start to rain the traces would vanish. Time to improvise : )

When we moved into our house, we found some old plastic sign boards that farmers use. As soon as I remembered, I decided this would be the perfect time to use them. Just to have a general idea where we’ve planted seeds and where we have still some free garden space.

We could also write the name of the planted vegetables on them, but that would make the signs less useful; I wouldn’t be able to reuse them for other varieties as needed. Also, weather might erase the text so I decided against doing that. Instead, I thought I’d draw the layout of the garden in a notebook. I’ll also use the notebook to write down when we planted which seeds in case we forget.

In the meantime, I’ll figure out what to do with the herbs. One one hand, There’s already some chives in the vegetable garden and to me it would be logical to have all herbs growing in the same patch. On the other hand, the vegetable garden is quite a way from the kitchen, and I’d love to have the herbs as close to the kitchen as possible. We also have plenty of light near the kitchen so that’s no issue.

What would you do, if given the choice?